After the powerful earthquake shook the very foundation of their work – the land under their project farms – Tarendra Lakhankar, Ph.D., Jeeban Panthi and their colleagues launched into action.

Based at the NOAA-CREST Center at the City College of New York, Dr. Tarendra Lakhankar designed a website to communicate the facts of the effort and raised about $10,000.

Like many people around the world, Tarendra Lakhankar, an environmental engineer and assistant professor of research at City College, was horrified by the news of a devastating earthquake in Nepal in April that killed more than 8,800 people, leveling homes and irreplaceable antiquities in the capital of Katmandu and the mountain villages to its north. 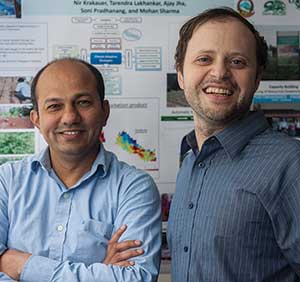 “They were really, really happy,” said Lakhankar, who spoke to Panthi by phone after the deliveries. “It’s been really bad – 90 percent of the houses are damaged.” - Tarendra Lakhankar

Because the area was so devastated by the quake, Lakhankar and his team bought supplies in India – 1,000 blankets, 1,500 kilograms of rice, 1,500 batteries and more – rented a truck and met a team of volunteers from Nepal at the India-Nepal Sunauli border crossing. Those volunteers, including medical professionals, then drove six hours to the hard-hit region where lab members have been working with locals for the past three years to improve farming efficiency.

On May 1, they were the first relief workers to arrive in the mountain villages, delivering blankets, tents, milk, daal and water to stranded farm families.

Through their outstanding effort , some aids and relief was brought to Nepal and it's surrounding region.