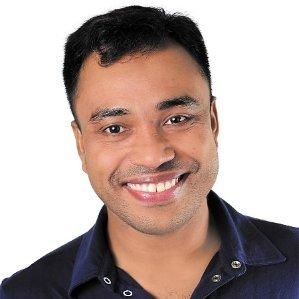 
Dr. Amin, a native of Bangladesh who chose to study computer engineering at CCNY after graduating from high school in his home country, is one of the many graduate students at CCNY who have earned their PhD as a member of the college’s NOAA-CREST center, which is a national leader in remote sensing applications.  He was drawn to CREST because as an undergraduate major in computer engineering he liked working with satellites.

While satellites can track algal blooms over great distances, there are many obstacles to obtaining useful data, he explains.  “When you look at a signal from space, 90 percent of what you get is atmosphere.  Also, it is difficult to detect cloud shadows over water, particularly in deep ocean areas.”
Dr. Amin developed several algorithms to remove atmospheric interference from satellite data. “It is possible to quantify geophysical parameters such as chlorophyll from space, but first it is imperative to remove the effect of the atmosphere.  Even a small error in atmospheric corrections can lead to significant errors in the retrieved products.”

Today, Dr. Amin works as a National Research Council Research Associate with the Naval Research Laboratory at Stennis Space Center in Mississippi.  His research interests include algorithm development for cloud shadow detection, atmospheric corrections and sun glint corrections.  However, presently all his time is occupied developing an algorithm for monitoring from space the oil slick now threatening the Gulf of Mexico.

There are no upcoming events. Please stay tuned. Click here for our Past Archived Events

Learn more about our Facilities

Our partners and affiliates consist of key players in the scientific and engineering industry that support our endeavors for education and mission.